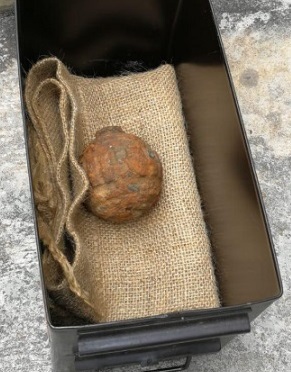 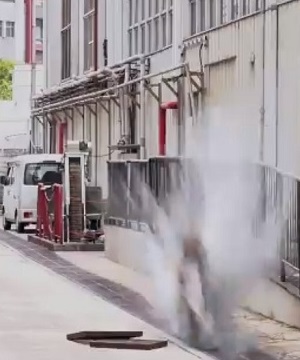 Moment grenade surrounded by BlastSax is blown up

An invention pioneered in Yorkshire was used to detonate a World War One grenade that turned up in Hong Kong.

The German device was discovered among a shipment of French potatoes imported for a Hong Kong chip factory.

Hong Kong Police were quickly called to the scene and they have BlastSax inflatable sandbags designed by Huddersfield company Environmental Defence Systems Ltd.

Specialist officers put the grenade down a drainage channel, surrounded it with BlastSax and then detonated it. The BlastSax is made of a material designed to mitigate the effects of an explosion and pieces of BlastSax can be seen being thrown out of the drainage channel when the grenade is blown up.

The grenade was found at the Calbee snacks factory on Saturday.

Superintendent Wilfred Wong Ho-hon from Hong Kong Police said: “The grenade was in an unstable condition. All the information to date suggested that the grenade was imported from France together with the other potatoes.”

The grenade is believed to have been left in a trench during World War I and accidentally gathered up with potatoes planted a century later in the former battlefield.

This is the fourth time in just over a year Hong Kong Police have used BlastSax to deal with old war bombs.

In January and early February 2018 they found three in the city within days on the same Hong Kong building site.

Before attempts could be made to defuse them BlastSax were deployed to surround them along with a base constructed from traditional sandbags.

BlastSax, which have undergone stringent MoD tests to prove their effectiveness, are used by the military and police forces worldwide to mitigate the impact from improvised explosive devices.

Designed to be taken to incident scenes quickly, BlastSax automatically inflate when they come into contact with water to become more effective than traditional sandbags within just a few minutes.

All three bombs were likely to have been dropped by US Navy planes between 1941 and 1945 when the city was under Japanese occupation, aiming to destroy the docks and Japanese shipping.

It is estimated that American forces dropped about 4,000 bombs on the city during the war but almost a third did not detonate.