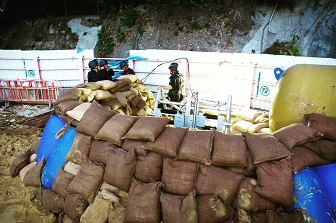 The 225kg (500lb) bomb, dropped by the United States Air Force, was discovered by construction workers near a dormitory for staff at the University of Hong Kong.

Before attempts could be made to detonate it, BlastSax were deployed to surround it along with a base constructed from traditional sandbags.

BlastSax, which have which undergone stringent MoD tests to prove their effectiveness,  are used by the military and police forces worldwide to mitigate the impact from improvised explosive devices. They can even stop bullets.

Designed to be taken to incident scenes quickly, BlastSax automatically inflate when they come into contact with water to become more effective than traditional sandbags within just a few minutes.

The Hong Kong bomb was detonated by the Explosive Ordnance Disposal Bureau. The bomb disposal experts cut two holes in the shell using water pressure and special chemicals were deployed to burn away the TNT inside the shell. The fuses were then detonated. It resulted in a loud noise and a flash of light.

Senior Bomb Disposal Officer Chow Shek-kin told reporters that it was an American aerial bomb with the model number AN64. It was found buried about 3 metres under the ground and contained about 260lbs of yellow explosives.

He told reporters during the operation: “As you can imagine it fell from the sky so many of the safety mechanisms are gone which means it is a bit more dangerous. As of now we have spent about 7-8 hours doing protective work to surround the bomb and ensure that, if there is an accident, at least the damage would be minimised.”

If it had exploded, it would have projected shrapnel at least 2000 metres away. After police surrounded it with BlastSax and sandbags the area of damage was reduced to a 400m radius.

* For more information on BlastSax and how they work go to www.blastsax.com