Let's take a closer look at our BlastSax in action.  They really are quite amazing. 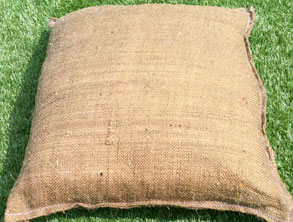 Emergency personnel at the scene had no BlastSax but they did have the company’s similar product, FloodSax, which were placed around the bomb before it was disposed of in a controlled manner in a park – and the drama was captured by CCTV footage.

The FloodSax – devised and manufactured by Yorkshire-based Environmental Defence Systems – include a special gelling polymer which help to absorb the shrapnel generated by the explosion.

The drama began when Londoner Marcus Fairs was digging in his garden in Haringey.

He said: “I was a little nervous when I realised it might be a bomb but it was pretty exciting too to be honest.

“It was like digging up a potent bit of history. I was being pretty rough with the spade when I dug it up as there was a lot of rubble where I was digging, so I assumed that if it was going to go off it would have already.

“All the same I put it down carefully and kept clear of it while I carried on putting the plants in and called the police when I’d finished.”

The park was closed and explosive officers from the Met moved the bomb as quickly as possible to the nearest place it could be safely exploded once it had been surrounded by FloodSax. These are lightweight and look like pillowcases until they come into contact with water and then expand to become even more effective than traditional sandbags.

Both FloodSax and BlastSax are biodegradable and present no environmental risks so any residue left from the explosion will degrade into the soil.

The controlled blast was caught on camera by a nearby CCTV system.

Marcus added: “The police explosives expert said it was unlikely to be live after all this time and it looked pretty corroded, so I didn’t think too much about it when they took it away to do a controlled explosion in the park.

“However, the size of the explosion was pretty shocking so I guess I was lucky.”

EDS Ltd managing director Richard Bailey said: “FloodSax have a worldwide reputation for stopping floodwater in its tracks and absorbing water from leaks inside homes and businesses but we also have a similar product called BlastSax which is used by the military to mitigate explosives around improvised explosive devices. This is why the FloodSax was chosen as the ideal way to keep the explosion as contained as possible in the park.”

It is not uncommon to find undetonated bombs from World War II in London.

A police spokesman said: “Incidents like this happen on a very frequent basis and are much more routine than the public realises.”